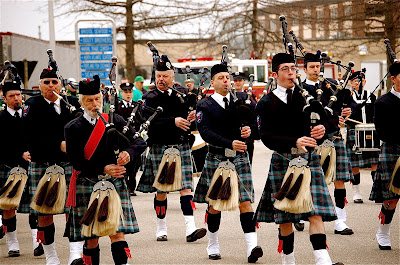 Happy St. Paddy's Day! Sunday afternoon, fighting away the showers, I attended Portland's annual St. Patrick's Day parade. It was short, but with some fine music and color. The Dunlop Highland Band (seen here) and The Claddagh Mhor Pipe Band provided the pipes, and there were kilts and sporrans abound. Since I didn't attend the ceili at RiRas afterwards, the highlights for me were the remarks of the General Consul of Ireland Michael Lonergan, with that Irish brogue and the pipe bands.
Remember: Brave Men Wear Kilts!
I haven't got one... but I WANT one!