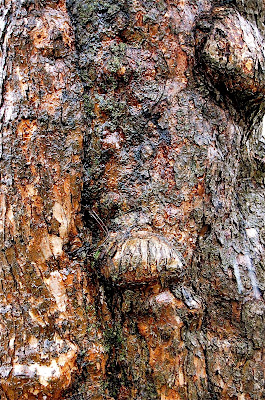 This is a very knotty photograph! At least that's what I see. Now when my 'better half' looks upon this image this morning, I'm willing to bet she'll see a face in the knotty trunk. She tends to see them everywhere-- in patterns of tile work, couch fabric, wallpaper etc.. You get the picture. Me? When I saw this apple trunk up back, the first thing that jumped into my head, of course, was Nottingham... England. Remember back-- Nottingham as in the Sheriff of Nottingham- Sherwood Forest- Friar Tuck- Maid Marian- Little John- those green outfits (on black and white television they said they were green). Of course, what I 'saw' was Nottingham and the legendary English folk hero, Robin Hood and his band of merry men. I first met him weekly on the British TV series The Adventures of Robin Hood starring Richard Greene from 1955-59 in 143 episodes. I watched it so intently, as close as I could to the screen, often with my homemade bow and arrows in hand. Today, it's hard to pass one of these apple trees and not glace at the branches and wonder what kind of a bow I could finagle out of it. That kid is STILL within me, someplace!

Ya, we still have birthdays! Today a BIG Happy Birthday greeting goes out to my nephew Z- in Portsmouth, NH. I know there's a bit of the 'Hood' in him! Stay cool!
Posted by Birdman at 4:15 AM