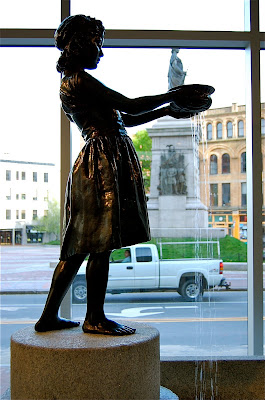 Today, May 1, 2010 is Theme Day across the CDPB CityDailyPhotoBlog community. She's on the move again. The"Little Water Girl" that is. She made her appearance in the 70's in Deering Oaks, near the Post Office on Park Avenue. Later in 1979, when the 'new' Portland Public Library was built at Monument Square, she was placed in the darkened courtyard behind the bars of the entranceway. But now, after the Library's renovations have been revealed. Voila!! She has been moved to a 'place of honor' in the lobby, overlooking the Square, inside out of the elements. And great news... the working fountain has been restored! Now, a bit of history--- there were four 'water girl' statues. The others were in London, Detroit and Chicago. The statue recognizes Lillian Ames Stevens, the second president of the Women's Christian Temperance Union, and was donated by the Union to the city in 1917. Take a look. She's a real beauty!