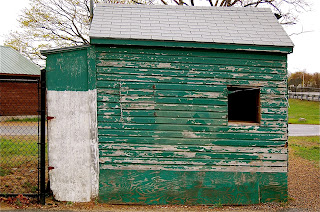 This, I believe, is one of the old ticket booths still standing at Fitzpatrick Stadium, formally known as Portland Stadium. It was renamed in 1989 for James J. Fitzpatrick, a most respected name in the annals of city sports. I attended many a Thanksgiving Game within these fences, and I must say, I paid for every entry. I slid my dollar to some old timer, whose face seemed enshrouded in white cigar smoke as he mumbled some semi-intelligent mumbo-jumbo through his smelly smoke and cigar drool. I swear my clothes held the aroma of cigars for days after those episodes. When I complained, Dad always decried, "Oh, don't be so spleeny!" Funny thing, to this day, I kinda enjoy a cigar every so often. Do I trace it back to these Thanksgivings long past? btw Don't pass this info along to Doctor B-, ok?