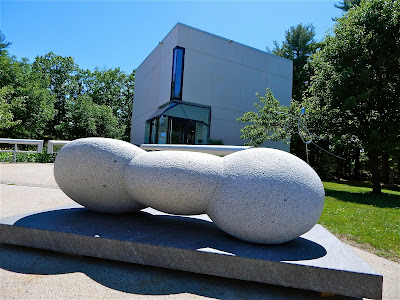 The Art Gallery on the University of New England campus off of Stevens Avenue is called 'the little jewel' by some, but I just call it the Cube. My Dad once told me that a guy named John Calvin Stevens (1855-1940) built a lot of homes in the city, but at the time the man with three names meant nothing to me. After college, I read a bit more about him and found out that he really wasn't a builder, but an architect who designed over 1,000 buildings in the state of Maine. He was a major innovator in the Shingle Style and Colonial Revival style in America. His designed houses in Portland are quite attractive in their exterior, and it's not really a challenge to spot one if you know there is one on the street you are travelling. They are quite distinctive. A close family to us, the B's, owned one on Craigie Street, and I was in it quite a few times. An amazing home. So much wood. So much light. So many windows. So many nooks and crannies. I loved stopping over and seeing the Mr. and Mrs. and their home. There's a lot I didn't know about this architect though. The biggest was that besides designing homes, libraries and churches he made time to paint.  I did not know this. This past week, we visited the Cube where about 60 of his landscape paintings are on display. Most Sundays in the early 1900's found JCS and a group of fellow painters painting 'en plein air' in Delano Park near his home in Cape Elizabeth.
I was pulled to his winter scenes most of all.
He designed parts of the city.
And he 'painted the town' too.
Dramatic.
Posted by Birdman at 12:01 AM