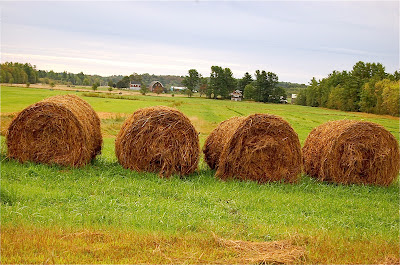 Hey hay!
Local country fields are being hayed one more time before the first frost comes. Driving into the city yesterday, I saw plenty of action on the field of a large farm. There were three haying machines working, going back and forth, and this scene  reminded me of a haunting hay story. I don't even know if there is a bit of urban myth mixed into it. An eighteen year old was working a field on his family farm in the Midwest somewhere. While working alone one afternoon, he accidentally fell off his tractor and was run over. His arm was severed. Thinking fast, he made a tourniquet out of his t-shirt and ran to the house, carrying his arm. When his parents returned shortly, they found him, covered in blood, sitting in the bathtub. He was rushed to the hospital and his arm was reattached. News reporters asked him later why he was in the bathtub with his arm, and he said he didn't want to get blood on his mother's rugs. Is the story true? I have no idea, but each summer, as I drive by fields being worked by large haymakers, this story comes back to me. I can't shake it. To me, it's very believable, yet haunting. I can actually start to tear up. Now, this is a son who loves his mother.
Posted by Birdman at 5:59 AM