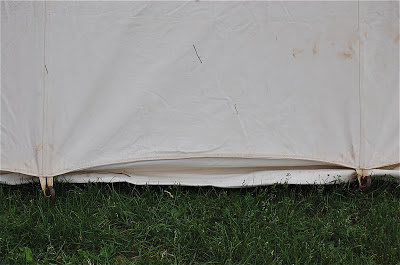 Summer fun.
Growing up I had a really neat pup tent. It was patterned after the tents used in WW2. Mine was green with flaps and had a constant oily smell, that I think was an attempt at making it waterproof. Leo had one too, and if we put them face to face and Mom threw a blanket over the top to cover the opening, the mosquitoes stayed clear for the most part. We could fit three in each tent on a crowded night, but it always made for more fun. We ate potato chips, assorted candies and drank Pepsis. We played poker well into the darkness, peed on the grass and after midnight walked around the neighborhood when all the lights were out. We raided old Mr. Oliver's fruit trees, and ate raw potatoes out of Mr. Bustin's garden till we got stomach cramps. Back in the tents, we played cards, told ghost stories, talked about the neighborhood girls and other forbidden subjects. Leo always seemed to crash first and others followed soon after.
These nights were always filled with lots of 'boys will be boys' stuff.
We really were, you know.
Posted by Birdman at 12:04 AM