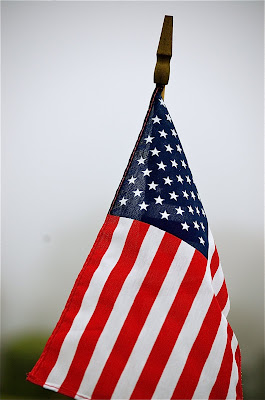 In 1916, President Woodrow Wilson officially proclaimed June 14th Flag Day. This is the flag on my Uncle Leonard's marker at St. Hyacinth's Cemetery. I captured it on Memorial Day in some early morning fog. Knowing my grandparents as I did, I can in no way fathom how they dealt with the death of their only son, Buster. I have the telegrams the family received. First, the one declaring him MIA, and then the second one that started: "We regret to inform you..."
His marker reads:
Leonard A. Gallant
Maine
LT 390
AAF Bomb GP, World War II
March 2, 1919-April 13, 1944
The family has recently found out some new information surrounding his death, that I'm not emotionally ready to write about yet. This country will raise many flags today.
Posted by Birdman at 12:03 AM