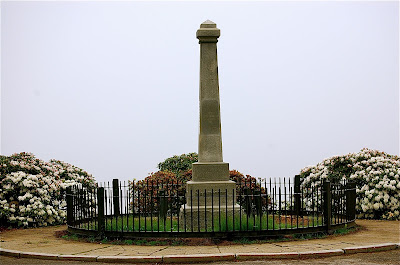 Names are funny things. Take Portland for instance. It was originally named Machigonne by Native Americans. In 1633, it was called Casco and settled as a fishing village. When the Massachusetts Bay Colony took it over in 1658, its name was changed again. This time to Falmouth. Later in 1786, part of the village, that was growing into a shipping port, formed a separate town and named it Portland. This monument, on Eastern Prom overlooking Casco Bay in the fog this morning, recognizes all four names on its base. Now, when you are born with just a few letters in your first name, you're stuck. Eddie, Skipper, Buddy, Billy, Teddy all had good nicknames, but Leo and I had no where to go. Never had a good nickname. Well, not one I'd admit to this morning anyway. Oh, don't get me wrong. When you occasionally (hahaha) exhibit that 'shoot from the hip', 'non-filter lip' you're called all sorts of names! I guess I'm fated to stick with those.