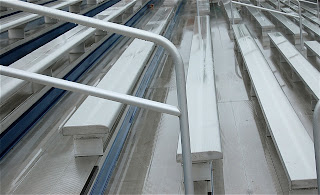 Growing up, I watched a lot of football, soccer and lacrosse games at the old Portland Stadium. I even saw a few concerts there. One Sunday afternoon, I saw the Bobby Fuller Four here singing a few of their hits, especially "I Fought the Law". As I remember the day, I also ran into Peggy and sis Linda that afternoon and was asked if I wanted to go to a concert at City Hall, featuring in their first US appearance a band called Jethro Tull with a young flautist named Ian Anderson. To tell you the truth, now my memory gets cloudy here, was it the pending music or the company that had me agreeing to go? I'll never tell. Whichever it was, the night, the music, the company was all fabulous. And the front row center seats were just an added benefit. To be that close, to feel the sweat flying off the musicians, it was a night filed in the memory bank. At one point in the concert, a phone on a piano rang and someone called out it was a call for Mike Nelson of the old TV show Sea Hunt. Out tramped Anderson in scuba gear, threw off the mask and flippers and burst into Aqualung.
"Sitting on a park bench..."
It was a night!
Posted by Birdman at 12:07 AM