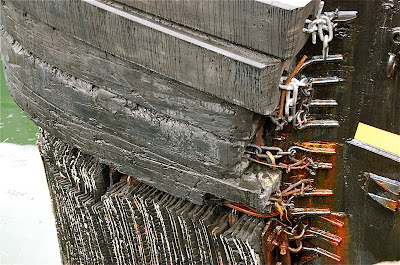 What am I? Well, if you guessed the front fender ( I call them the bumpers) on the Rowan M. McAllister tug based in Portland Maine then congratulations! You win a kewpie doll! By the way, if you had won one or have a vintage one in your possession, you'd be sitting pretty. They're worth quite a bit of money. I never won one at the World of Mirth that used to come each year to Riverside Street and set up camp alongside the golf course, but I grew up with lots of dolls. Don't get the wrong idea. I was very shy remember. I have two sisters and long ago, in another world I lived in a house loaded with dolls. They were everywhere. They were old and discarded; they were brand spanking new. They were 'chatty cathies'; they were 'baby eats a lots'. They cried; they talked; they ate; they walked; they peed. They did it all! Well, almost. Now, upstairs in the cluttered attic I have boxes of T-Rexes, Batman costumes and toys and Star War space vehicles. What do I do with these? Maybe I should just take them to the pier and let the McAllister just push them off to never-never land. As Creech would say, "How the heck did you ever get from working tugboats to Chatty Cathy? How does your mind work?" Hahahaha! Somethings in life can never, ever can be explained.
"Tugboat fender? Hey, you just won a kewpie doll!"
"Great!"
Posted by Birdman at 7:16 AM