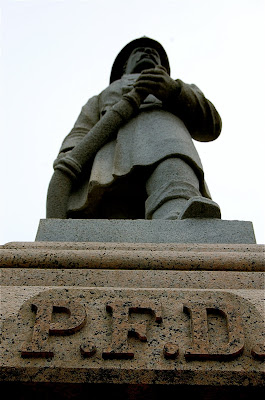 This sculpture, The Fireman's Memorial, originally rested on Western Promenade (1898-1910), and then was moved to the hallowed grounds of Evergreen Cemetery (1910-1987). I passed this memorial almost every day at work and marveled at the intricate work of sculptor, Edward Souther Griffin (1834-1928). Interesting fact department: he was a wood carver, and this was his first time working with granite. Dedicated on September 5, 1898, he created the piece to honor the brave men of the city's Fire Department. Since 1987, it has resided at 380 Congress Street on the site of our Central Fire Station. The Department has quite a history in the city. I knew a bit about it, but nothing really about its origin as far back as 1768. That's a lot of fires! That's a lot of dedicated service to the City of Portland.