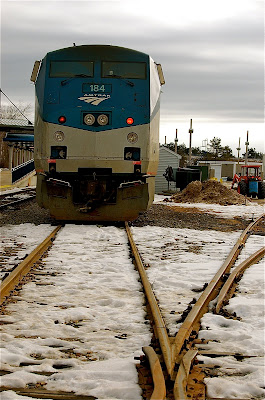 Here's Amtrak's Downeaster just pulling into the Portland station on a recent morning. The train is still an 'in process experiment' bringing back the rail travel to the city, if you ask me. Now, ask the powers that be in the city, and they'll probably tell you the train is back! To be honest, ask most people, and they'll tell you, they hope train travel in southern Maine and north, for that matter works. But really, making this work is still up in the air around here... with, of course, economics at the base of the issue. We took the 8:30 train to Boston two summers ago. The trip down was quite fun passing all the stations south to big city. The day was perfect, yet a bit warm for walking the Freedom Trail, but it was something we had wanted to do as a family for a long time. J- is a history buff and shared numerous insightful historical moments along the Old Boston trail. Along the way, we even took in a draught at The Bell in Hand, the country's oldest continuously operating pub. The day was warm and tiring, so the trip back was sleepytime.

http://www.thefreedomtrail.org/
Posted by Birdman at 5:01 AM