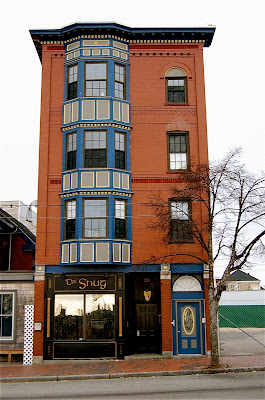 Well, as I've said before on this site, language is a subject that really intrigues me. One of my many bookmarks I visit each day is:"Wordsmith" Each day I seem to find a trinket either a word I've never seen, an etymology that proves so interesting or a grammar usage that I'd never even come across before. Today, I have a word I stumbled across with my camera. Snug- Now, I've seen it used as a verb and adjective, but I have never even thought of it as a noun. After photographing this Irish bar, The Snug, heading up Munjoy Hill, I thought I'd investigate the word further. n. Chiefly British
A very small private room in a pub. noun
Etymology: short for snuggery Date: 1860
I also found that the history of "snug" began in Ireland in the late 19th century. It was typically a small, very private room that had a frosted glass window, set above head height, accessing the bar. You paid a higher price for your beer in the Snug, but nobody could see you. It was not only the well off visitors who would use these rooms. The snug was for patrons who preferred not to be seen in the public bar. Interesting! I bet my brother doesn't even know of this. This afternoon, I just might stop in here for a pint, if I can get away from the chores and the temps in the 80's!
* and no, I haven't forgotten Snug in A Midsummer Night's Dream-- all you Shakespearean scholars out there.
Posted by Birdman at 7:16 AM