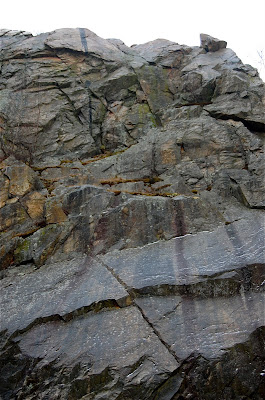 Around these parts, this is the backside of Rocky Hill. Growing up my brother and I spent lots of days 'exploring' every nook and cranny of this Hill... literally and figuratively. I took a ride back yesterday morning in the rain. Here is one of my first posts on my photoblog, January 29, 2009. The Elephant Rock spoken of here is the largest outcropping on Rocky Hill.
"... Elephant Rock rises behind these structures. On winter days, when we lived on Washington Avenue, my brother, the neighborhood kids and I would grab large pieces of cardboard and head for this large outcropping for a day of fun sliding on the rock in the snow and ice. I remember there was one place on the back that had a long sluice-like run. The higher up the rock you could get, the longer your run. You had to be careful though, too far and you'd go over the edge to what we thought would be certain death on the rocks below. Long story short-- my brother, about 8 at the time, went into the Elephant Rock lore books one day, by losing his balance going up too high and sliding backwards off the humpback face. We ran through the snow to the front of the rock in disbelief. Around the corner, he met us with a big grin; maybe not knowing how close he had come to his early end." There are no trespassing signs everywhere now, but no matter, I plan a trip to the top soon. Some things in life, just must be done.