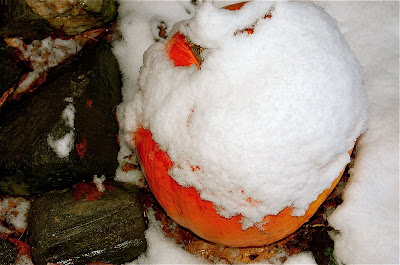 I've heard of frost on the pumpkin, but snow? Well, poet James Whitcomb Riley’s(1853-1916) text is the authority:
"When the frost is on the punkin and the fodder’s in the shock,"
I know that old Jack Frost visited our pumpkins on a few October nights. And most farmers around these parts had their 'fodder in the shock' well before then. Because after Halloween weather-wise, all bets are off, and snow and the harsh ravages of a Maine winter can come any day. Now, the whereabouts of this mushy pumnkin? As of yesterday, it is now resting comfortably in our compost pile.
Posted by Birdman at 6:50 AM