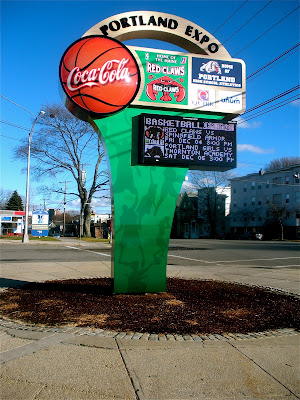 It's opening night for the Maine Red Claws. The NBA D-League comes to Portland tonight, as the Maine Red Claws( with players from the the Boston Celtics and Charlotte Bobcats) take on the Springfield Armor at the Portland Exposition Building. Will basketball FINALLY work in Maine? We'll see soon. It's been tried before in the city and in Bangor. Remember the Maine Lumberjacks? Beyond the D-League, the Expo has quite a history. I've witnessed the Harlem Globetrotters with Cab Calloway, lots of concerts by bands before they hit the big time, and loads of high school basketball double-headers. They even hold the Maine Brewers Festival here in early November each year to packed house. So will this venture make it in city like the Seadogs(AA baseball) and the Pirates(AHL hockey) A full house tonight-- but will the fannies still be there in late March-- only time will tell.
*ps See you Kitty at 6!
Posted by Birdman at 6:20 AM