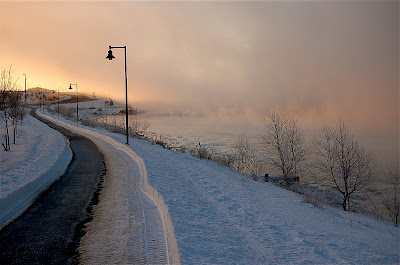 Happy Groundhog Day!
Love the subtle colors of this early morning look at the Fore River shot from West Commercial Street, just across from the new Mercy Hospital complex. Did you know? The Fore River is a short horn-shaped estuary, approximately 4 mi (6.4 km) long, separating Portland and South Portland. Many of the port facilities of the Portland harbor are along the estuary, which is formed just southwest of Portland by the confluence of several creeks. The estuary was initially known as Levett's River, so named by the first English settler of the Casco Bay region, Capt. Christopher Levett.
Posted by Birdman at 5:40 AM