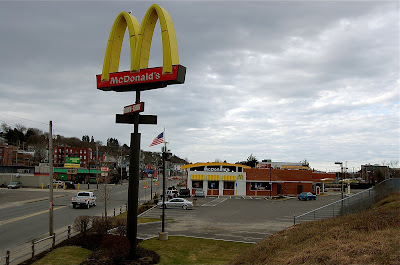 The angle on this one is interesting, I think... that's about it though. Where have all the people gone? This is the site of the first McDonald's Restaurant in the city. It became one of the first unofficial 'hangouts' for teens in the mid-Sixties. By 10PM most summer nights, the parking lot was packed with kids moving from car to car renewing old acquaintances and making new ones. P's maroon, Buick Wildcat was what we cruised in mostly. Big, and fast, with a powerful engine under the hood, we'd back into a parking space, buy 15¢ burgers and 11¢ fries, and think we had the world 'on the end of a string'. Now, when I look down on this 'ghost town', I wonder why the parking lot needed to be expanded to four times it size while it stays perpetually empty. Most of these establishments serve families these days, on the prowl for a relatively 'cheap' meal. It's devoid of teens- gone forever, a relic of a lost era.
* Note: about six or seven years later, I met my wife-to-be on Deering Avenue, and the rest is history. It's been a GREAT ride, E-. Today, Happy Anniversary to us! Can you say 34? I know you can!
Posted by Birdman at 6:25 AM