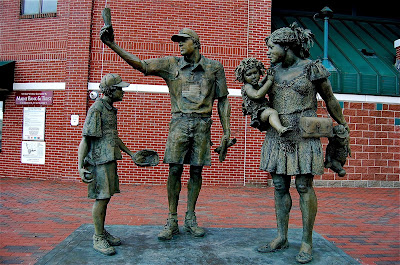 Today is Opening Day for the Portland Sea Dogs, the Double A affiliate of the Boston Red Sox. By afternoon the city will be buzzing with baseball fans. "American Baseball Family Group," a sculpture by Rhoda Sherbell, has been standing on the brick walkway outside of Hadlock Field, greeting fans, since 2007. The bronze sculpture portrays a family on their way to a day of viewing the 'grand ol' game'. Before it even appeared on the plaza, there were a couple of controversies hovering around it-- both a million miles away from baseball. One centered around(believe it or not) who controls public art in the city, and the other stemmed from the seemingly ethnic background of the family depicted not reflecting the modern diversity of our changing city population. In my opinion, a closer look at the sculpture, two years later, would lead anyone to say... why the controversies? Like a lot of artwork, that you meander by, and wonder about, it has grown on me. I like it! It fits!

'Dogs to watch? Easy money says to keep your eyes on Lars Anderson, Josh Reddick and Junichi Tazawa. They seem to be on the fast track to the Bigs!
Play Ball!
http://web.minorleaguebaseball.com/index.jsp?sid=t546