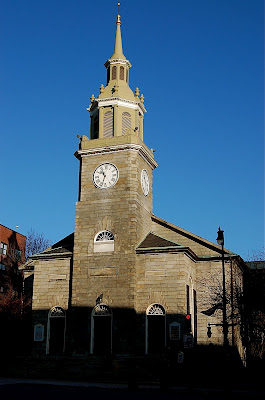 When I was in 5th Grade at St. Joseph's Grammar School, I joined the school's basketball team. All our games were played at the Granville Lee Recreation Center( we just called it Lee Rec.) located on Munjoy Hill, next to the old North School. Now, from Morrill's Corner that meant a long bus ride to Monument Square and a getting a transfer to get you up the 'hill. But traveling with a bunch of 5th Grade friends made it quite fun. There were always three games back to back to back involving teams from Butler, North, Emerson, St. Doms, St Pats, Cathedral and us. As I remember, Butler School had dominating teams when I wore the 'blue and gold', but a few years later Dad coached my brother's team to the Lee League Championship. After the games, like clockwork, we'd venture across the street to a small pizza joint, get a slice of pepperoni and some penny candy and begin to make our way down the 'hill' to the Square to catch a bus back home. It was quite a journey, but being with friends and 'downhill' made it go much faster. Along the way, we'd always pass this beautiful, old, granite church. It was a benchmark that we were almost to the bus stop. Sometimes in snow and hard-driving wind, this was important. There used to be a sign out front, that said simply "Jesus Saves". On days we lost, I use to question, jokingly... when? To this day, I have never forgotten that sign on those winter walks. Years later, I found it to be the the First Parish Unitarian Universalist Church built in 1825. What a marvelous history it has too, coinciding with the early roots of the city. It's worth a read. This morning's early sun crests upon the spire and lights the way for the day.
http://www.firstparishportland.org/
Posted by Birdman at 7:30 AM