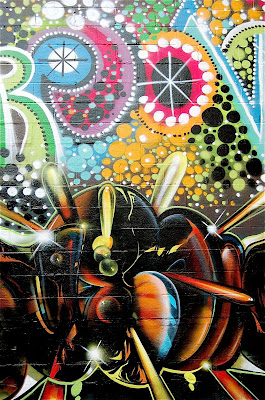 Here's a little color for a gray morning, with threatening showers around here. I was wondering the other day after a walk downtown: what is the opposite of art? "The Housewives of Orange County"? Just plain television? Indifference? Twittering? Or for that matter, what is the opposite of graffiti? Is there an opposite? Just off Free Street, up an alleyway and around the corner, there is a 'canvas' of gray cement block walls. Recently added here is a run of wall space covered with layers of hues. After a short walk to and fro, it's difficult not to to be in a good mood. The strident coloring seems to move within me. Now, don't roll your eyes; it does me. So there! Some might look at this work(?) and just shake their heads and say why? For others, it's their artistic expression, I guess. Was this piece commissioned? Don't know, but there was a note in cursive written along an unfinished wall nearby that read "This is not done." Enjoy it for what it's worth. Something bright and alive on a cloudy morning. Maybe the sun's not far away.
"It's clever, but is it Art?" Rudyard Kipling
Posted by Birdman at 5:15 AM