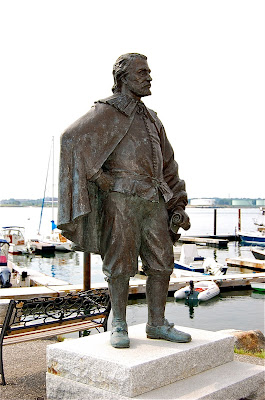 George Cleeve statue in front of Portland Yacht Services.
George Cleeve (ca. 1586- after 1666) was an early settler and "founder" of the city of Portland. This statue has been moved around a bit. It's got a bit of a nomadic history; I guess you could say. There was a time that nobody wanted it. I think it's cool... Cleeve is seen looking up the Hill to the city proper.
Posted by Birdman at 4:00 AM