Means to an End 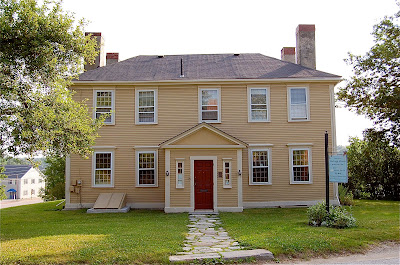 The Means House(1797) at the Tate House Museum.
"After Captain George Tate's death in 1794 and following the Revolutionary War, Captain James Means (1753-1832) in 1797, built a splendid new home on a triangle of land overlooking the site of the mast yard. Captain Means had been at Valley Forge and supposedly "served long" with George Washington during the revolution. According to tradition, Lafayette, in 1825, visited the Means House. A beautiful Federal-style home, with a hipped-roof and high interior ceilings, Means House remained a private residence until March of 1996, when, marking the 100th anniversary of their founding, the Colonial Dames in the State of Maine embarked upon an exciting new project. The Means House was purchased by the Colonial Dames to be a support arm for the Society and for general operations of the Tate House Museum."
http://www.nscda.org/museums/maine.htm
Posted by Birdman at 4:00 AM